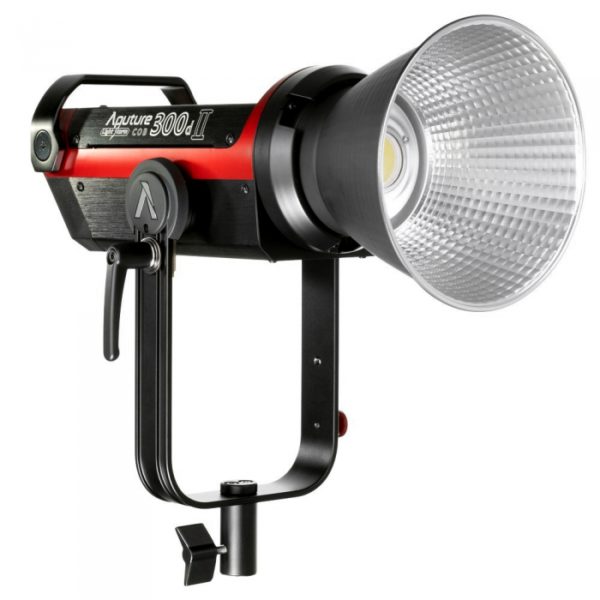 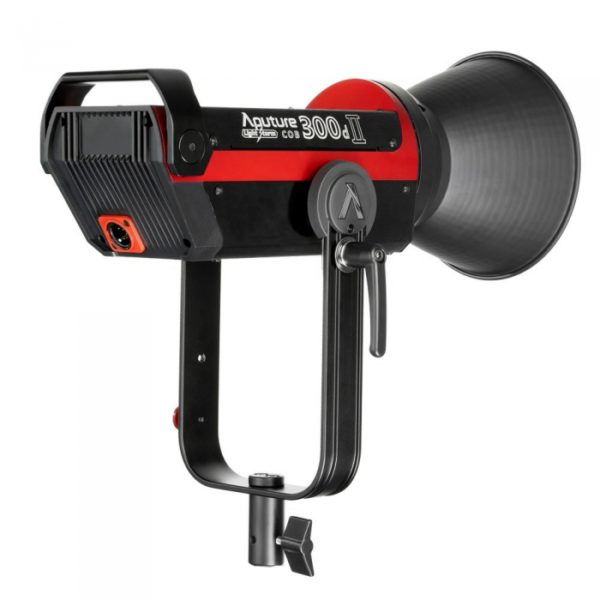 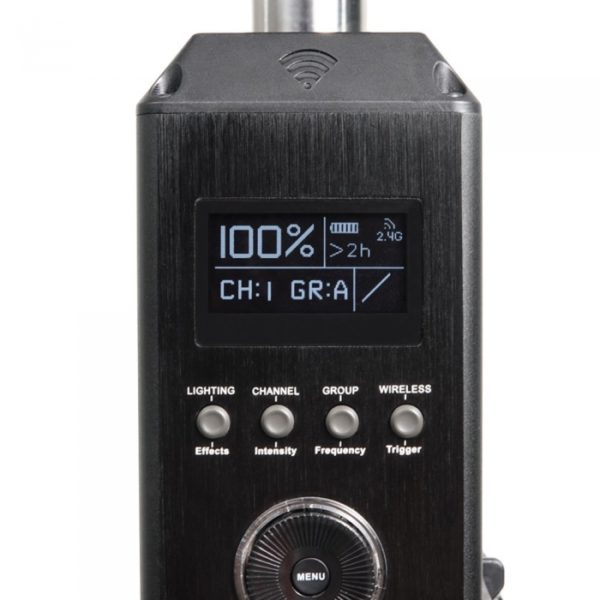 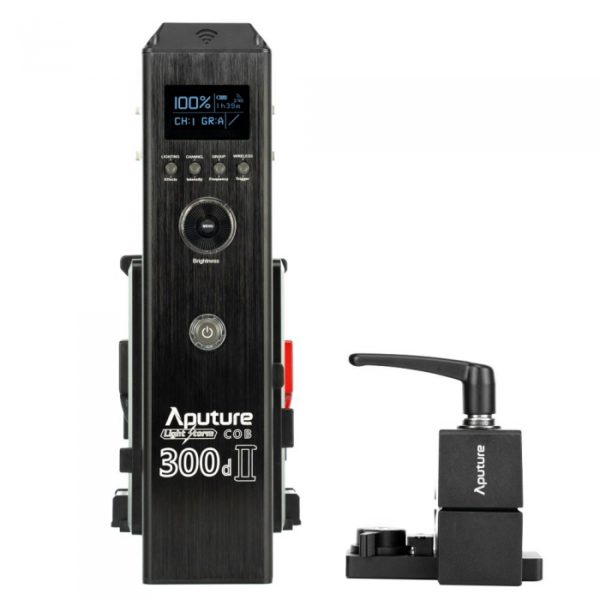 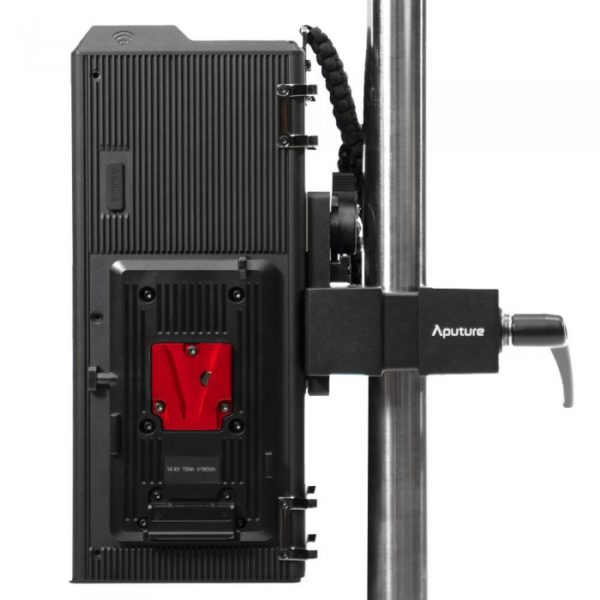 Built on the foundation of the popular LS C300d, Aputure's Light Storm LS C300d II LED Light Kit with V-Mount Battery Plate is an enhanced version with 20% more power, refined features, and advanced connectivity. Aputure uses Chip on Board (COB) technology to produce a 5500K colour temperature, with power consumption of just 350W, while outputting 3500 lux of light with an efficient reflector at a distance of 9.8'. In addition to power efficiency, this fixture also has a CRI/TLCI rating of 96, indicating accuracy in colour rendering. The fixture's ballast/controller employs 0 to 100% Linear, Logarithmic, Exponential, and S-Curve dimming and is separated from the body of the fixture, making it lighter and reducing its size. A mounting base is included for use with an optional clamp, allowing attachment to a light stand to distribute the weight.

The LS C300d II's performance is backed by its design. The all aluminum construction goes through numerous fabrication steps, and the reflector and accessory mount is the widely used Bowens S-Type. A wireless remote that allows you to control on/off and dimming functions from distances up to 100m is included. And speaking of control, Aputure also offers the Bluetooth Sidus Link App Control which allows wireless adjustments of all the light's functions as well as effects such as Lightening, Pulse, Flash, and Explosion. Ideal for sound-sensitive environments, the LS C300d II can be seen but not heard. The intelligent cooling system employs temperature-sensitive fans to regulate the heat. Even at maximum power the fan is undetectable by most people.

The LS C300d II is ready for worldwide use thanks to its 110-240 VAC power supply but it also has two battery plates, allowing you to use V-Mount batteries for external power when mains current is unavailable. The LS C300d II is delivered with a power cable, a DMX cable to connect to the ballast, a wireless remote, a base for an optional clamp, and a beefy carrying case that can support 220 lb to protect the light during transport and storage

Changing the Game
A couple of years ago, Aputure impacted the industry with the 300d, creating a powerful and compact LED fixture that could be modified easily. Filmmakers from around the world were impressed by the light's capabilities, but encouraged by user feedback, Aputure produced the redesigned and improved 300d II. The light is 20% brighter than its predecessor, more durable, more portable, and “smarter” than the original 300d.

Even More Output
By utilizing the latest in Aputure COB LED technology, the 300d II outputs a whopping 20% more light than its predecessor. When combined with the optional Fresnel 2X, the 300d II can produce up to 80,000 lux, approaching the luminance of a 575W HMI! And as always, the 5500K balanced 300d II maintains very accurate colour fidelity with CRI/TLCI ratings of 96+.

A More Robust Lamp Head
The 300d II also introduces redesigned features, while maintaining the same form factor and lightweight aircraft aluminum body as the original 300d. The latest yoke allows for 360deg of rotation, and when combined with the handbrake locking mechanism from the 120d II, you'll be able to mount the light in any position, with any modifier.

Maximum Efficiency with Hyper Reflector
The 300d Mark II is also the first Aputure light to feature the all-new, hyper efficient 55deg reflector. By slightly narrowing the beam from 60 to 55deg and redesigning the inner shape and coating of the reflector, Aputure was able to increase the output of the 300d II by more than 3-times, when compared to the original design.

A Redesign Revolution
The control box is completely redesigned. By utilizing Aputure's fanâ€Âless heat sink design, the 300d II's All-in-One control box is now completely silent. Composed of a durable aluminum alloy, with a new concealed antenna and military grade paracord strap, the control box is ready to withstand the rigors of any film set. The 300d II control box is also the first product to utilize Aputure's quick release plate and clamp system, allowing you to firmly secure it on any stand, truss, or speed rail.

Power Solutions for Indie Filmmakers
The 300d II can produce its maximum output by using two high-capacity V-Mount batteries, but it also features advanced technology that allows you to power the light with a single battery at up to half output. The included 6m Neutrik cable provides the 300d II with a sturdy power connection and allows you the convenience of not having to grab a stinger to power your light.

Stepless Dimming
The long-awaited 0 to 100% stepless dimming control allows you to use the 300d II in low-light environments or to overpower the sun and can utilize any of 4 different dimming curves: Linear, Logarithmic, Exponential, and S-Curve. The 300d Mark II also features a Studio Mode that allows the lights to turn on and be controlled immediately upon receiving power, making it ideal for DMX lighting grids.

More Options for Control
In addition to the control wheel, the 300d II also features DMX512 compatibility, a 2.4 GHz Aputure Wireless remote with an FX toggle button, and the ability to be controlled by the Sidus Link App using a Bluetooth mesh network protocol.

Sidus Link App Control
Featuring recently introduced Bluetooth SIG mesh network technology, the 300d II will also the first app controllable Aputure lighting fixture. This technology will allow you to control a 300d II from up to 396m away, by linking multiple lights up to 80m apart. Using the Sidus Link App, you'll be able to access all of the functions of the control box, in addition to being able to save presets, finely tune and trigger additional lighting FX, as well as install firmware updates, all from your smartphone or tablet.

Redesigned Carrying Case
Aputure also made the carry case with grip trucks and run-and-gun filmmakers in mind. The new 300d II carrying case is composed of durable walls with a soft exterior lining that can support up to 100Kg, providing both ample protection and a seat for you on set. The bottom of the case is also covered with an easy to clean, slash proof material, letting you rest easy, knowing your 300d II will survive just about any situation you throw at it.