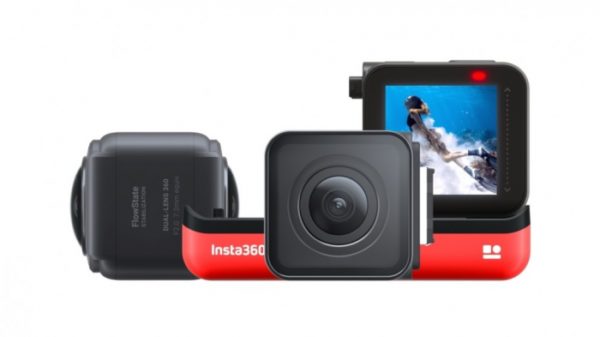 The Insta360 ONE R 360 Edition is one of the key configurations of the modular ONE R action camera system. The 360 Edition includes the Core module, Dual-Lens 360 Mod, and the necessary Battery Base that holds the modules together. The Core module, which is the brain, and any other module of your choice, mount side by side on the Battery Base. The different modules can be swapped in interchangeably next to the Core module. A 1″ Wide Angle Mod, which captures 5.3K resolution video, is also available, sold separately, and can be swapped in. The ONE R allows you to approach different applications with one system.

All pixels are not created equal. The Dual-Lens 360 Mod raises the bar with Super 5.7K resolution, leveraging H.265 encoding, advanced image processing and an AI-powered finishing algorithm to preserve detail and make your footage pop.

FlowState achieves gimbal-like stabilization without the gimbal. Thanks to a new scene-detection algorithm, your footage stays clear and steady even in low light.

ONE R’s Invisible Selfie Stick feature lets you capture easy aerial angles and unique third-person perspectives with a flick of the wrist while using the Dual-Lens 360 Mod.

Bullet Time shots put you at the heart of the action. Automatic horizon leveling and smart speed-ramping make them easier than ever.

Select your subject with a tap or a voice command when shooting in 360. ONE R’s AI-powered tracking algorithm keeps it locked in center-frame. Even when obstacles break your line of sight, Deep Track picks up the shot as soon as your subject reappears.

ONE R supports HDR capture for photo and video. Highlights, shadows and everything in between come across just as you see them.

After dark, turn on Night Shot to capture photos that stay natural, clear and vibrant.

The ONE R app uses AI-powered FlashCut to find your best shots and edit them together on beat. FlashCut analyzes footage on theme, quality and time of capture to create cinematic clips that are ready to share.

Shooting in 360 gives you infinite possibilities and perspectives. Auto Frame uses a powerful computer-vision algorithm to sift through them and recommend the ones that are worth adding to your edit.

Highlight key moments with cinematic slow-mo, or speed things up with a stabilized hyperlapse.

Color Plus automatically color grades your footage. Vibrant, bright and stunning visuals with a single tap.

ONE R is engineered for safe, efficient shock absorption, while the Lens Guards protect your camera’s vitals no matter what life throws at you.

Note: ONE R is waterproof after being fully assembled and installed in the included Mounting Bracket

ONE R’s simple, swipeable 360-degree touch screen lets you preview your shot and then play it back to make sure you nailed it.

Grab the GPS Smart Remote to control ONE R, easily lock onto subjects for tracking, and record real-time GPS data to track your adventures.

The new Apple Watch app makes controlling ONE R on-the-fly easier than ever.

When ONE R is out of reach, just give a shout to start shooting with voice commands.

ONE R is vlog-ready with a 3.5mm mic adapter and optional top-mounted Accessory Shoe. Packing extra-light? Pair a RODE Wireless GO or record audio directly onto your AirPods.

You’ve seen the Invisible Selfie Stick. Now meet the invisible drone. ONE R’s customized Drone Mount lets you capture airborne 360 views that hide your drone entirely from sight. Adjust your angle in post to get mind-blowing effects that used to only be possible for professional FPV pilots.