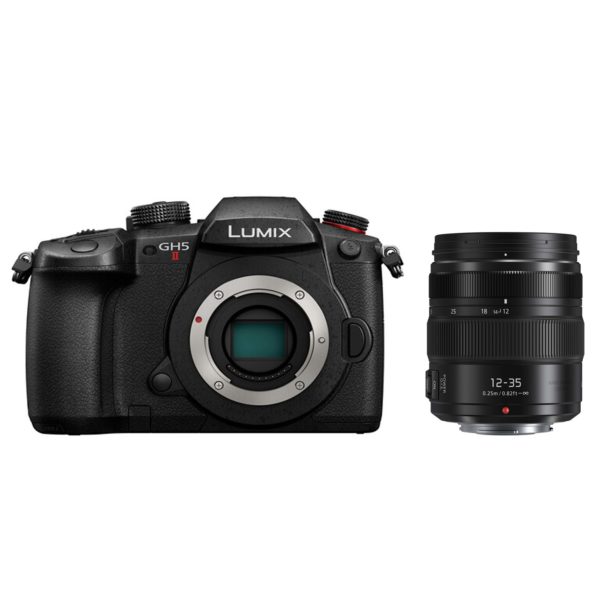 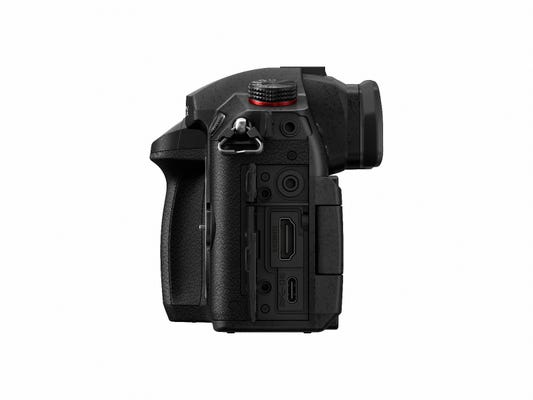 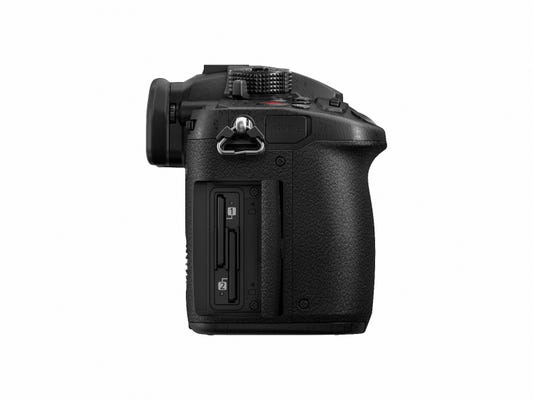 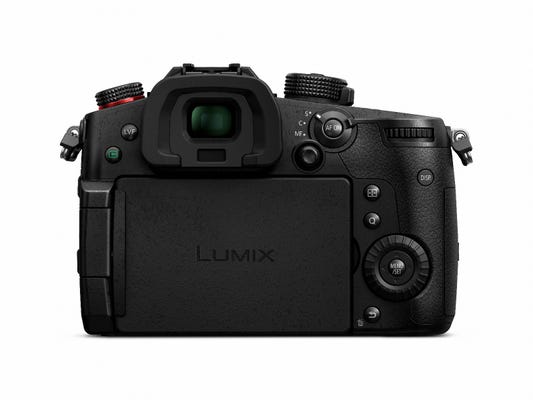 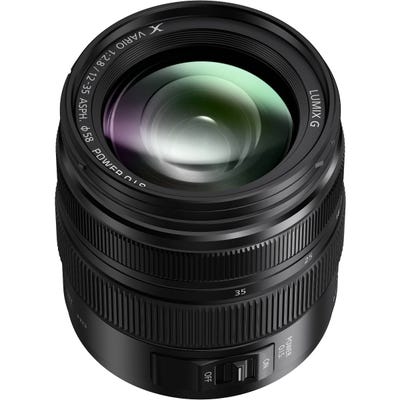 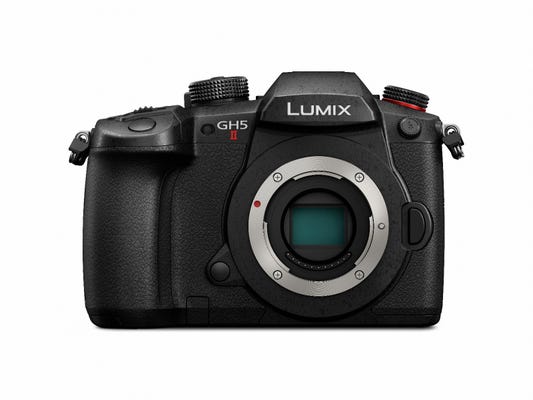 Panasonic Lumix GH5 Mark II offers outstanding video performance for professional videography and is capable of unlimited video recording in all video modes. It is the first G Series model to offer high-quality wireless live streaming – with simply the camera and a smartphone – using the LUMIX Sync App. The camera complies with H.264 in RTMP/RTMPS protocol, allowing streaming directly to platforms such as YouTube or Facebook without the need for a paid cloud streaming server. In addition, 1080p Full HD at up to 60 frames per second 16Mbps maximizes video quality. For wired live streaming, the LUMIX Webcam Software download allows the GH5M2 to act as a high-quality webcam, connecting directly to a PC via USB. With a future firmware update, the camera will support wired IP streaming (RTP/RTSP) with the benefit of high image quality and greater stability, which will deliver greater flexibility for live production and multi-camera setups. The GH5M2 delivers up to 6.5-stops slower shutter speeds for impressively stable handheld shooting and video panning, via the advanced Body I.S. (Image Stabiliser) and the latest algorithm developed for the S1H – an improvement over the GH5 by 1.5 stops. The camera also incorporates a 20.3-megapixel Digital Live MOS Sensor with a new Anti-Reflective (AR) coating for maximum lens performance, and an updated image processor with the latest high-speed Venus Engine. The AF improvements first introduced with the S Series for more accurate subject detection and precise focusing – particularly for faces and heads, as well as animals and moving objects – enhance both video recording and still shooting. Other capabilities that will be welcomed by G Series users include 4K 60p 10-bit internal recording, external output via HDMI, and V-log L profile pre-installed in the camera.

Panasonic Lumix GH5 Mark II features outstanding video performance for professional videography and is capable of unlimited video recording in all video modes. In addition, the camera can record C4K/4K 60p 4:2:0 10-bit; and also offers a simultaneous output of 4:2:2 10-bit over HDMI during 4K 60p 4:2:0 10-bit internal recording. With no crop when recording in 4K 60p, the user can capture video in the original viewing angle of the lens. V-Log L comes pre-installed in the camera, delivering a high dynamic range with broad colours, and renders a very flat image while maintaining all of the colour information within the image. Designed with consistent colour management and an easier post-production workflow in mind, the recorded footage is easily matched with V-Log L footage recorded by the LUMIX S1/S1H/S5 or LUMIX GH5/GH5S/BGH1. 35 conversion LUTs for VariCam cinema cameras can be downloaded free of charge for use in the LUMIX GH5M2. Like the S1H – the S Series video flagship full-frame mirrorless camera – the LUMIX GH5M2 includes the HLG gamma profile and has two types of Cinelike gamma presets selectable in Photo Style. HLG allows for high dynamic range video shooting with minimal need for editing, thanks to its broadcast-ready colour gamut format. With the included Cinelike modes, impressive warm skin tones or delicate nuances of light and shadow can be reproduced even without colour grading over V-Log L footage. The Cinelike D2 setting gives priority to dynamic range and the Cinelike V2 prioritizes contrast. MonochromeS and L.ClassicNeo Photo Styles, which were first introduced on the LUMIX S5, have also been added. All these modes can be used for Anamorphic video recording. For VFR (Variable Frame Rate) recording, C4K/4K 60fps, Anamorphic 50fps, and FHD180fps are available. AF can be set before starting VFR recording. The GH5M2 also incorporates cinema-standard practical video assist tools such as Waveform Monitor and V-Log L View Assist.

Versatility and Reliability in the field

The camera is highly reliable in the field, with secure construction and a sealing for every joint, dial, and button. The shutter unit also has a life of around 200,000 cycles. For outdoor use, the GH5M2 uses the DMW-BLK22 2200mAh high capacity battery first launched with the LUMIX S5. The battery complies with USB PD (Power Delivery), convenient when traveling and using a USB power bank, and can also be recharged via AC or USB. The GH5M2 has a double SD Memory Card slot compatible with high-speed, high capacity UHS-II for Relay, Backup, or Allocation Recording. Content sharing with smartphones is streamlined using Bluetooth 4.2 Low Energy connection, Wi-Fi 5-GHz (IEEE802.11ac), and 2.4GHz Wi-Fi® (IEEE 802.11b/g/n). With an always-on Bluetooth connection, a smartphone can act as the camera’s remote control via the LUMIX Sync app. The settings of a GH5M2 camera can also be copied and transmitted to other GH5M2 cameras when shooting using multiple cameras (either via LUMIX Sync or SD Card).

The GH5M2 features high-speed, high-precision AF. In addition to the eye, face, and body, the head is also separately recognized by real-time detection technology to provide even more precise focusing. The camera keeps tracking subjects when they move quickly, turn away, tilt their head or move far away from the camera. Also, improvements to DFD technology have enhanced AFC, which allows the camera to keep tracking small or fast-moving subjects and capture them in crisp focus. The GH5M2 detects the eye and face at a 2x faster recognition cycle speed than the GH5, even if they are around 50% smaller in the frame.

Offers Great Optical Performance. It is designed for Micro Four Thirds cameras, where it delivers a convenient 24-70mm equivalent focal length range. A constant f/2.8 maximum aperture affords consistent performance throughout the zoom range, and benefits working in difficult lighting conditions as well as enables greater control over depth of field. The optical design employs a series of aspherical, low dispersion, and high refractive index glass elements to control a variety of aberrations and distortions for sharp, clean image quality and Nano Surface Coating has been applied to reduce ghosting and flare.

Top three Reasons we think you will love this camera

Experience a whole new level of wireless live streaming. The Lumix GH5 Mark II boasts of its industry-leading live streaming capabilities for modern content creators. This will allow today’s content creators to take advantage of the acclaimed image quality and usabilities of the GH line, such as 4K 60p 10-bit internal recording, unlimited recording modes, and robust ergonomics, while also being able to live stream wherever and whenever they desire. It is highly reliable in the field, with secure construction and a sealing for every joint, dial, and button. The new enhancements of this camera set a new standard and a true-game changer in the market.