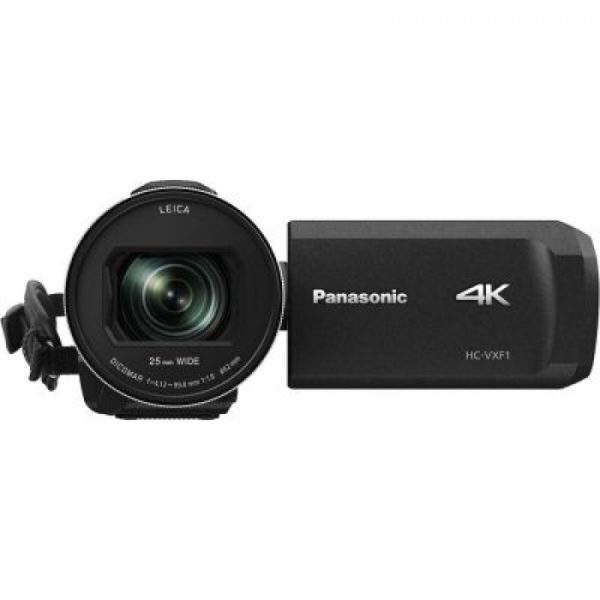 Offering several cine-style features not often found in a consumer camcorder, the Panasonic HC-WXF1 4K UHD Camcorder combines 4K UHD capture with support for up to four picture-in-picture video feeds. The HC-WX1's integrated f/1.8-f/4 24x Leica Dicomar zoom works with the back-illuminated 1/2.5″ MOS sensor to provide optimal imaging, even at lower light levels. Use the HC-WXF1 to record 4K UHD video at 24 or 30 fps, Full HD video at rates up to 1080p 60 fps, and up to 26MP still photos.

In addition to its 3″ flip-out, touchscreen LCD, the HC-WXF1 has an electronic viewfinder (EVF) with a rubber eyecup, enabling you to clearly view your shots, even when shooting outside in bright light. A control ring on the zoom gives you greater creative control over your shots, letting you adjust focus and iris manually. Two quick-access buttons enable you to quickly control functions like white balance, focus peaking, and expanded focus.

A secondary camera built into the LCD screen neatly captures a shot of the user, or an alternate view of your subject or scenery. This Twin Camera can be tilted up or down a total of 40°, and has a limited number of independently-adjustable controls. The secondary image is captured as a PiP shot, and can be displayed along with PiP shots using the Multi-Camera feature for a total of four PiP shots. The wireless Multi-Camera feature enables you to record feeds from up to three smartphones as PiP shots. When using a Class 10 SD card, a separate, clean main camera image can be recorded in addition to the PiP/main-image combo. It is not possible to record the PiP images separately.

Twin-Camera & Wireless Multi-Camera Capture
Record up to four camera angles simultaneously, using the integrated Twin Camera, and up to three smartphones as your additional cameras. Twin- and multi-camera views are displayed in picture-in-picture (PiP) format, and are recorded simultaneously. A clean feed of the main-camera image can be recorded as a backup when recording to a Class 10-speed SD card.